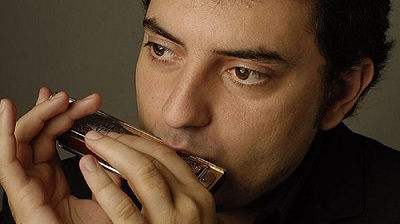 Grammy Award winner, Antonio Serrano is an internationally acclaimed harmonica virtuoso from Spain and labeled as the greatest harmonica player of his generation. A native of Madrid, Mr. Serrano is considered one of the world’s most versatile and talented masters of the harmonica, displaying an amazing technique that spans many different musical genres, from classical to jazz, tango, and flamenco.

He studied with the late Larry Adler, one of the first harmonica masters to perform major works written by classical composers specifically for the instrument. Over his career, Mr. Serrano has performed with the many of the world’s great symphonies including Belgium, Cologne, Heidelberg, Kiel and Venezuela, among others, playing concertos written for the harmonica by composers such as H. Villalobos and Malcolm Arnold. He has also performed arrangements for harmonica by George Gershwin, Astor Piazzolla and the Romanian composer, George Enes. Antonio is a remarkable performer who has thrilled audiences throughout Europe and Latin America. He was a member of a performance group headed by Paco de Lucía. Before that, he played and/or recorded with Larry Adler, Toots Thiellemans, Winton Marsalis, Jerry Gonzalez, Chano Dominguez, Lou Bennett, Jorge Pardo, Vicente Amigo, Tomatito, Armando Manzanero, Luis Salinas, and Javier Colina. He has also recorded with most of the major pop and rock artists in Spain and for movies by Pedro Almodovar.