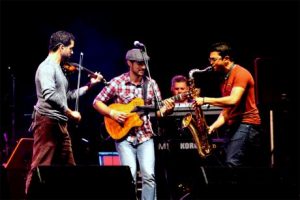 This group writes lyrics and music with a social content and message, using violin, acoustic guitar, sax, drums, bass, trombone, Latin percussion and vocals.  It seaarches for the common ground between past and future; between tradition and innovation.  The result is a rich musical repertoire combining traditional music with modern orchestration sound.

Asi Somos have been active in the Puerto Rican cultural scene since the year 2000, playing their music in festivalsand cultural events. In 2002 they recorded their first CD entitled "Injurias"

In 2005 they recorded the song Cachita for the album "Nuestra Version: Rafael Hernandez", which waas a tribute to the well known writer and Puerto Rican composer Rafael Hernaandez. Well known and respected artists and musicians participated in this recording which was produced by the Puerto Rican Institute of Culture.

In 2007, Asi Somos recorded their second album entitled "Silencio".  In this musical production, they used orchestration and vocal arrangements with the fusion of the different rhythms that characterize the group.  Twenty seven musicians were invited and participated on that production.