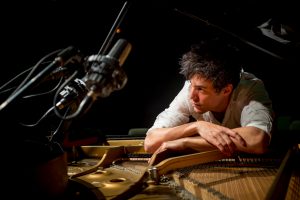 “This young musician has a very bright future.”
-Wynton Marsalis

“Pacheco truly is a phenomenon of the piano, continuing the tradition of Chucho Valdés but more importantly a pianist with his ​​own identity.”
-Arturo O’ Farrill, Multi Grammy Winning Pianist

“We have not heard a talent like this in years. They are already saying that he will be the one to save Latin Jazz and remind everyone that the greatest musicians with the most fire, are Cuban.”
-Wendy Oxenhorn, Jazz Foundation of America

Hailing from Havana, Cuba, Jorge Luis Pacheco is one of the leading pianists of the new generation of jazz in Cuba. Is a fiery young pianist with “flying hands.” He has performed all over the world including prominent jazz clubs such as Dizzy’s Jazz at Lincoln Center, theaters, and festivals such as the Blue Note Jazz Festival in New York.as well as the Sziget Festival in the City of Budapest, Hungary.He also performed at the Kennedy Center in Washington with his quartet and solo piano several times as well as the legendary Apollo Theater in  where a lifetime achievement award was presented to Herbie Hancock.

He has collaborated with the likes of Wynton Marsalis and the JLCO, Arturo O’ Farrill and the Legendary Lenny White as well as with Dave Weckl and Richie Goods in trio format in 2018. Pacheco is a passionate,extravagant,exciting entertainer on stage and constantly captures the audience’s attention with his heartfelt performances and electric energy.Pacheco, JoJAzz Award 2007 in Havanna , is  also the winner of  the “Audience Award” and the “Second Jury Award “at the International Jazz Piano Competition Montreux Switzerland in july  2014. In 2017 Pacheco won the best solo and performance award in the  jazz contest “Made in New York” in New York City whit one of his on compositions.

He is a virtuoso pianist, composer, arranger, percussionist and singer. Monty Alexander exclaimed that he “defies genre” often playing Cuban jazz, traditional Cuban music, original Film scores, and a new  Symphony for Jazz Quartet and Symphony Orquestra that he composed, which is inspired in the music of  South America and Afro Cuban Music where Pacheco showed the audience a range of different sounds that were from the most classic performed by the Symphonic Orchestra to the most contemporary by the Jazz Quartet and where both joined to achieve a balance between both musical worlds.